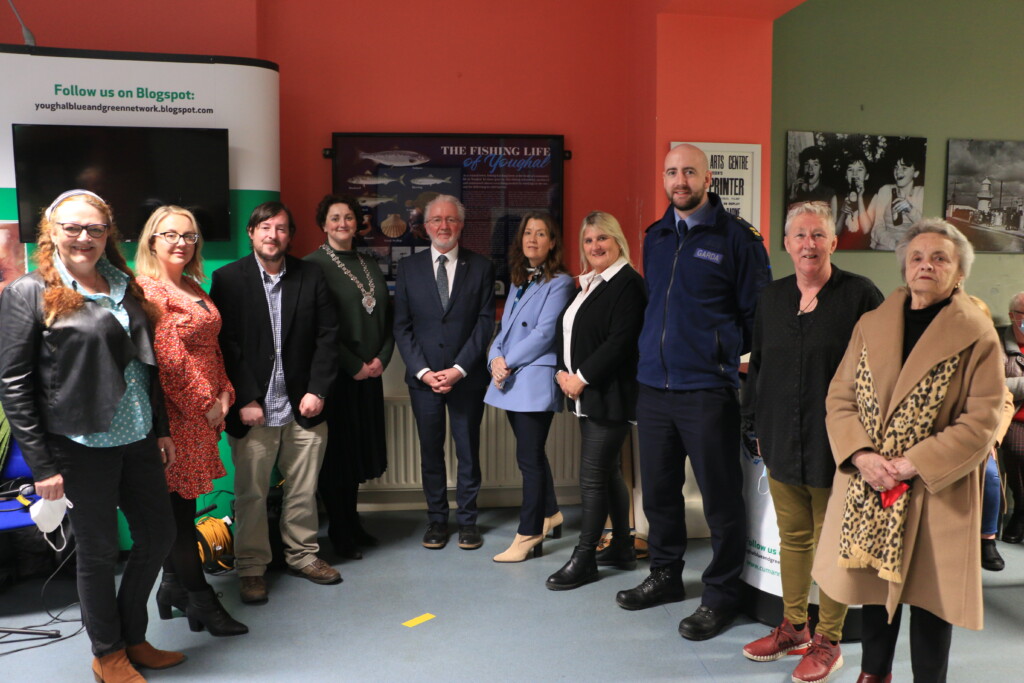 Youghal Blue & Green Community Network offer their congratulations to Cumann na Daoine on it’s 25th anniversary this year, and to thank the staff of Cumann na Daoine for their support in making this launch such a successful and enjoyable event. 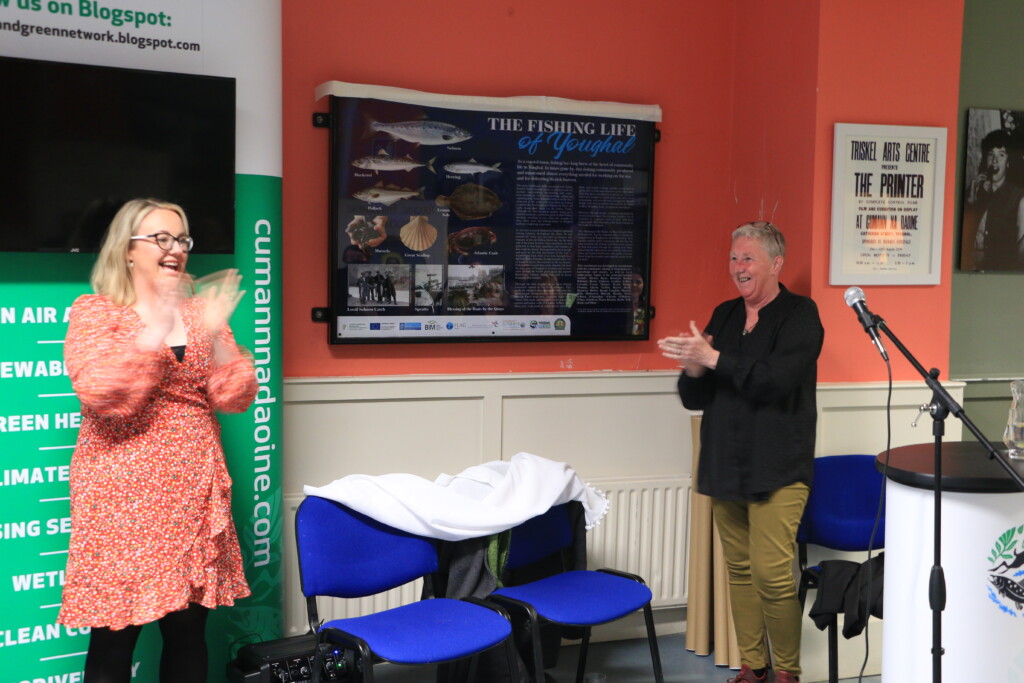 On Friday 1st April Youghal’s Blue & Green Community Network launched the Community Storyboard ‘Fishing Life in Youghal’ at Cumann na Daoine, Catherine Street, Youghal. This Community Storyboard gives social and historical background to Youghal’s sea and inshore economic life. It acknowledges the fishing families of the town as well as identifying the main elements of the fishing trade. Presented in both Irish and English, the Storyboard provides a vivid overview of this trade, now mostly lost to the town.

Guests were welcomed to the CnD Community Café with music from students at Brú na Sí (Youghal Comhaltas) and then by MC Niamh Herbert, Community Worker with Youghal Community Health Project.  Minister for Heritage and Electoral Reform Malcolm Noonan, Green Party, launched the event: his background in rural development and environmental actions giving additional insight into the valuable role fishing played in the history of the town. Councillor Ann Marie Ahern, representing County Mayor Gillian Coughlan, spoke highly of the work and commitment involved, and the value of the work was complimented by Brenda O’Riordan of BIM. Local heritage was well presented by Margaret Kelleher (Buttimer), from a fishing family herself, who shared stories and names of fishing life over the years. 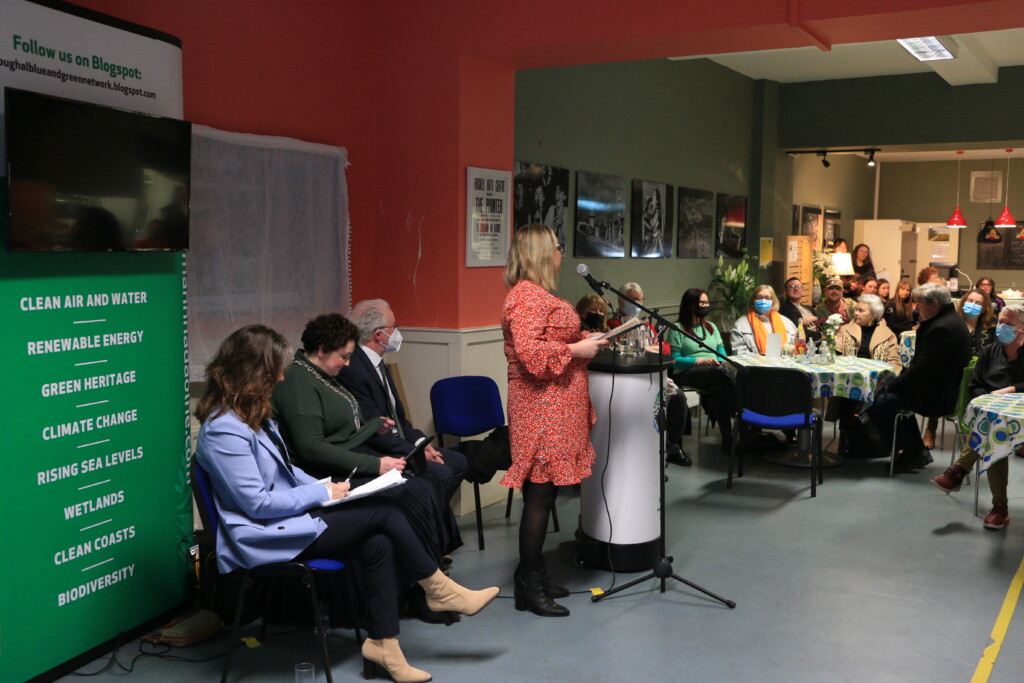 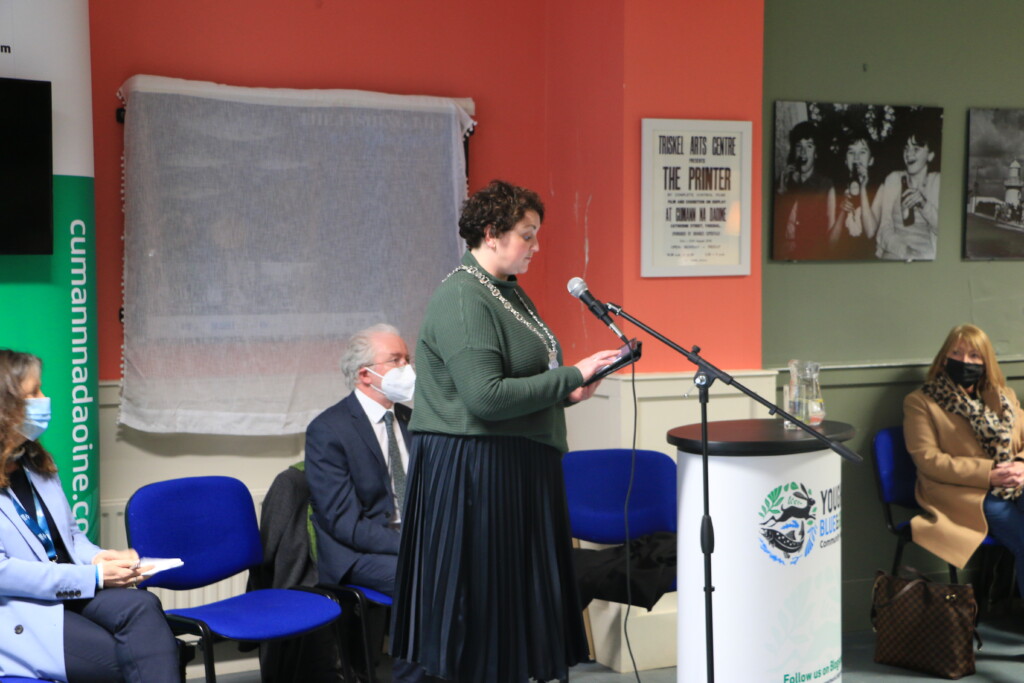 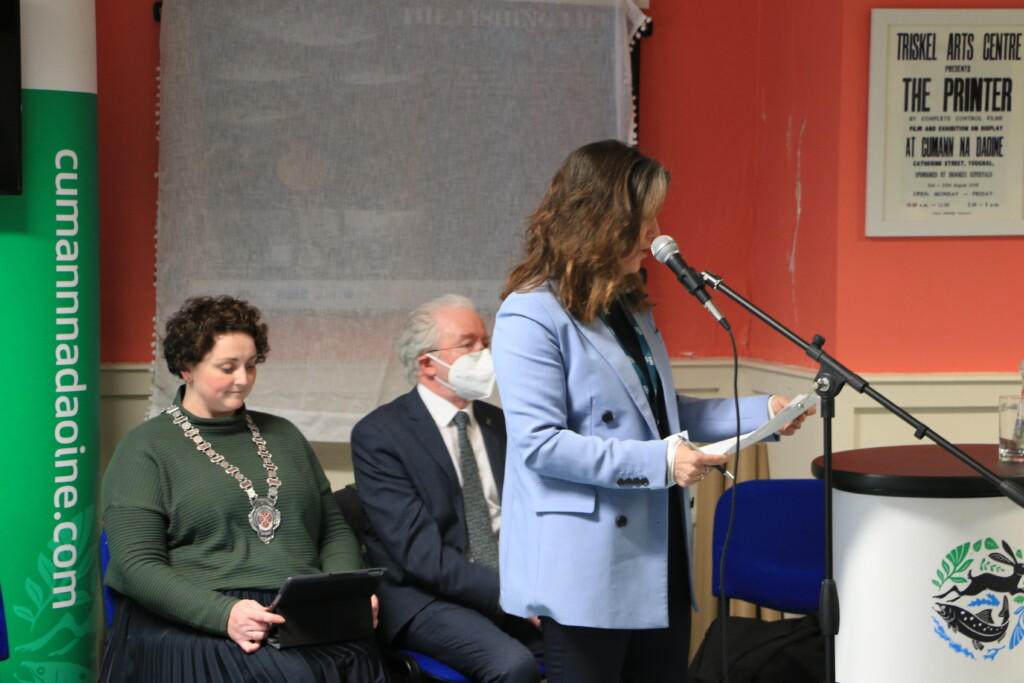 He continued: “Our marine area covers seven times our land area. It’s vitally important that we protect our species and also the heritage of fishing in this country. I travelled around the coast the last year meeting fishing communities and get their views…it’s about recognising the importance and value of the marine but also the heritage and cultural value [of that]. We were conscious that we need…to include the whole idea of ‘my heritage’ fishing and the important history involved. Generations of families have been involved in fishing and we want to recognise that in our marine protected areas. We want to ensure we protect coastal communities and protect biodiversity in coastal areas” 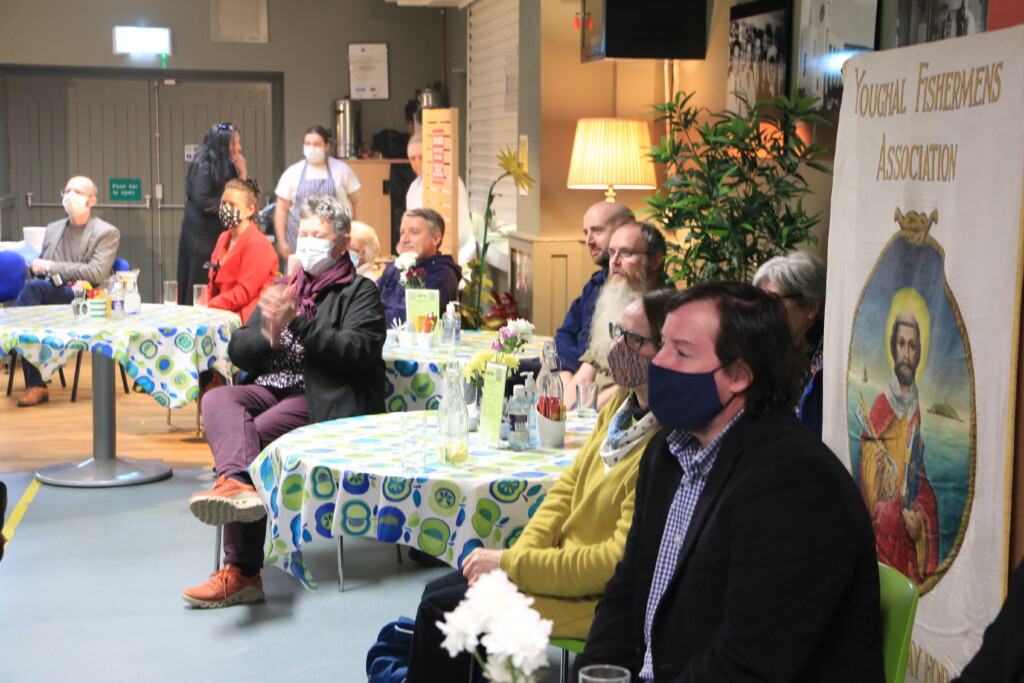 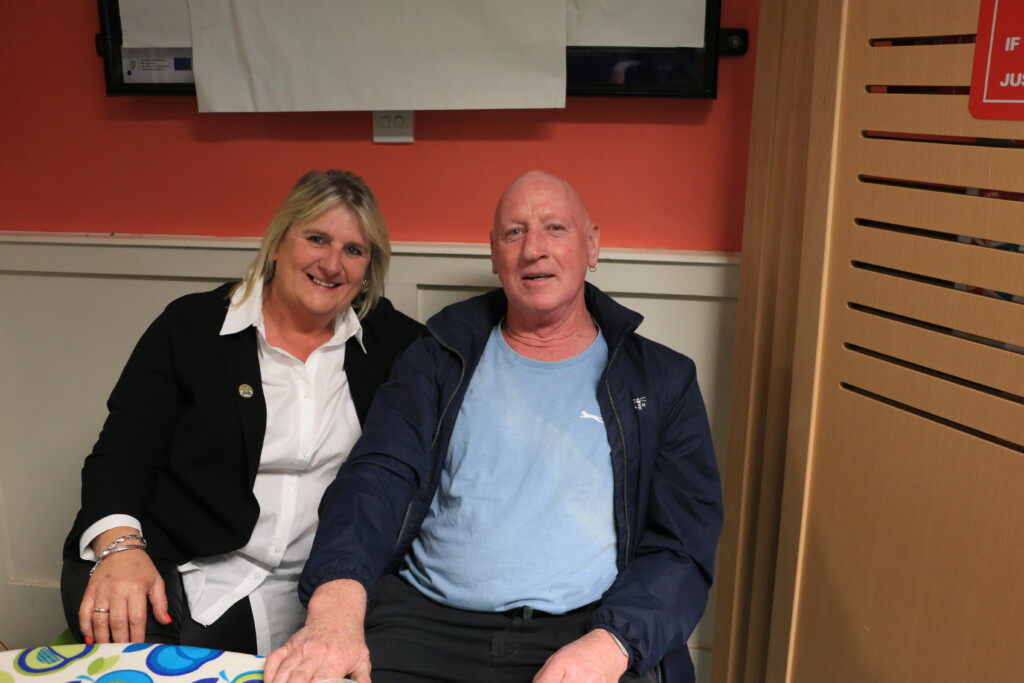 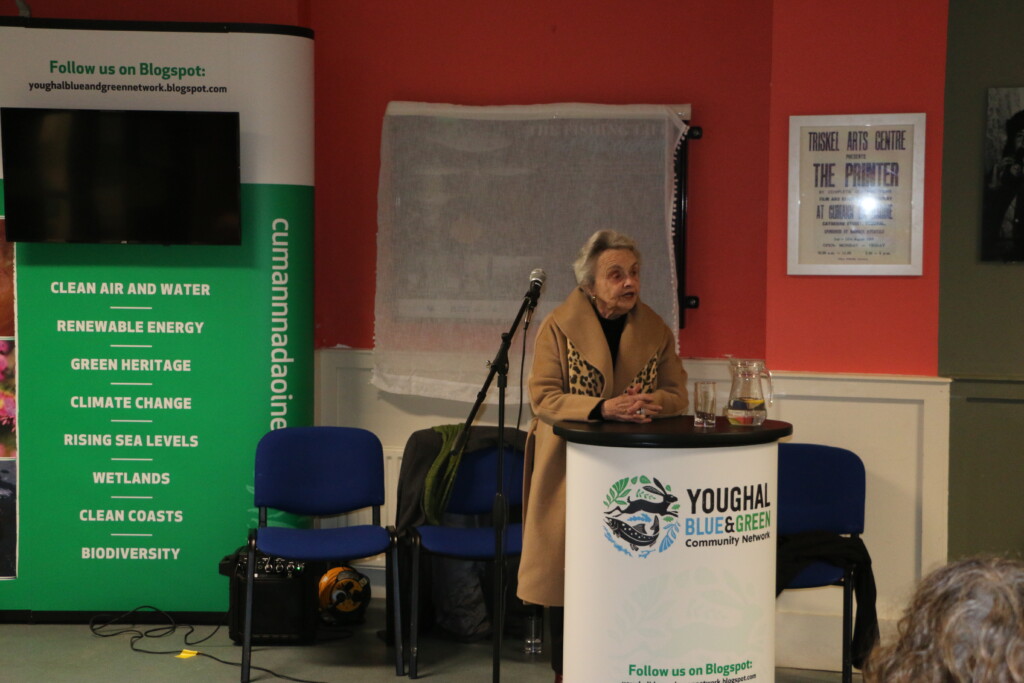 Speaking about biodiversity, Minister Noonan stressed the importance of “…getting people’s views on how to protect our nature, our coastal areas, our marine our rivers, our estuaries and our land. There’s going to be a really important piece of work on that and I am really looking forward to getting involved in it -it really gives due recognition to that coastal heritage” and continued “…an area’s biggest resource is its people and you have that here…they contribute so much to the regeneration of the town and the re-vitalisation and the re-imagination and looking at low carbon future and achieving biodiversity…a lot of those values we are trying to enshrine and to transform change, are in that storyboard. I’ve never been more excited about the future – for young people especially it’s important that we continue to adapt and to change and that change has to happen at community level…we are trying to set the policy but it’s at community level that change happens”. 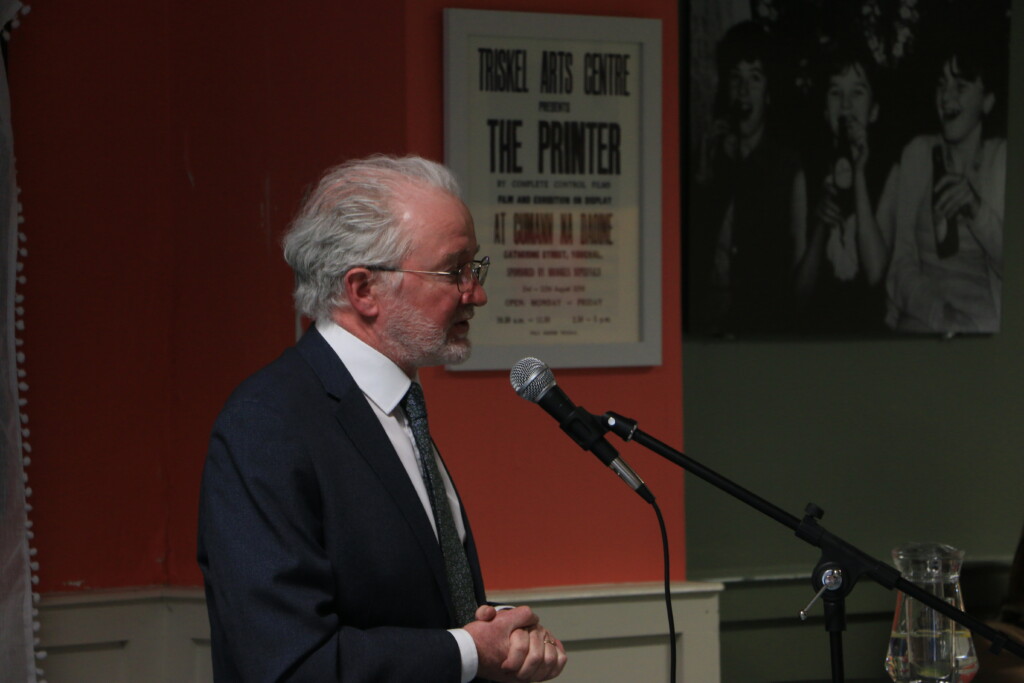 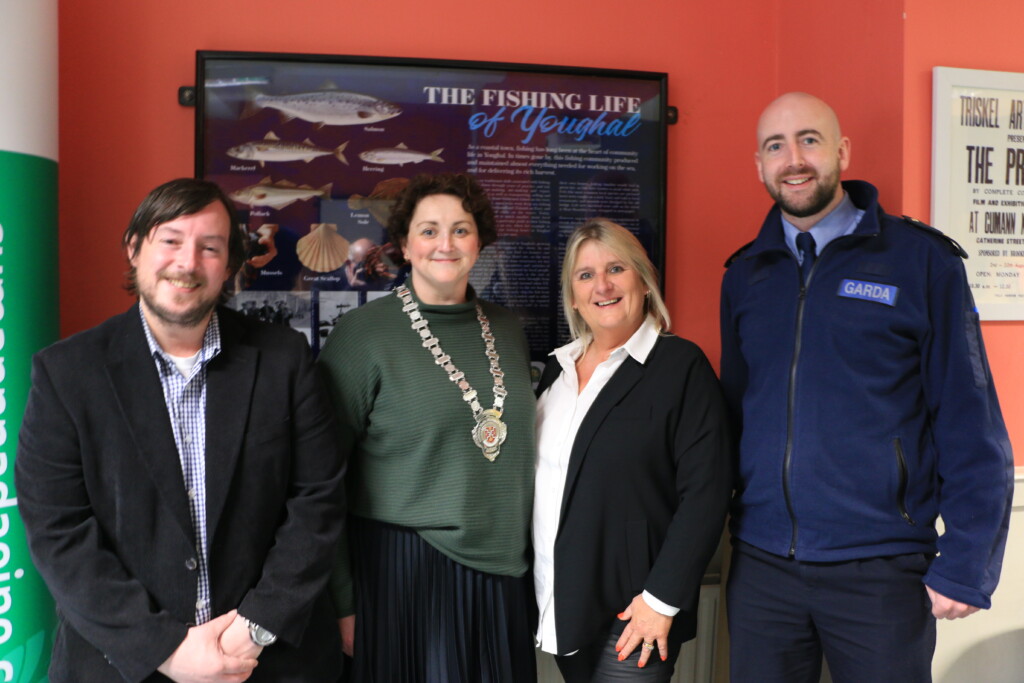 Minister Noonan concluded: “This Storyboard will stand the test of time: it gives credence to being involved and gives testament to the many generations that have been involved in fishing here in Youghal over the centuries. It’s important to celebrate that. While there are great challenges ahead – and in many ways they can be scary – there has never been a better opportunity to think radically; differently and to be innovative and creative. And that creativity is measured in this Storyboard”. 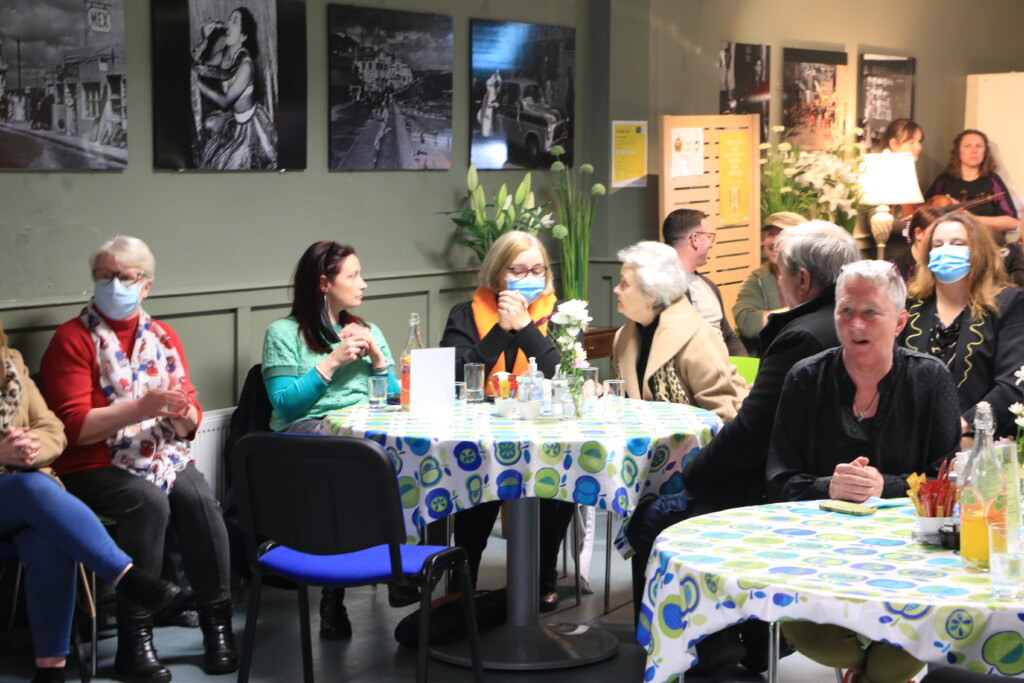 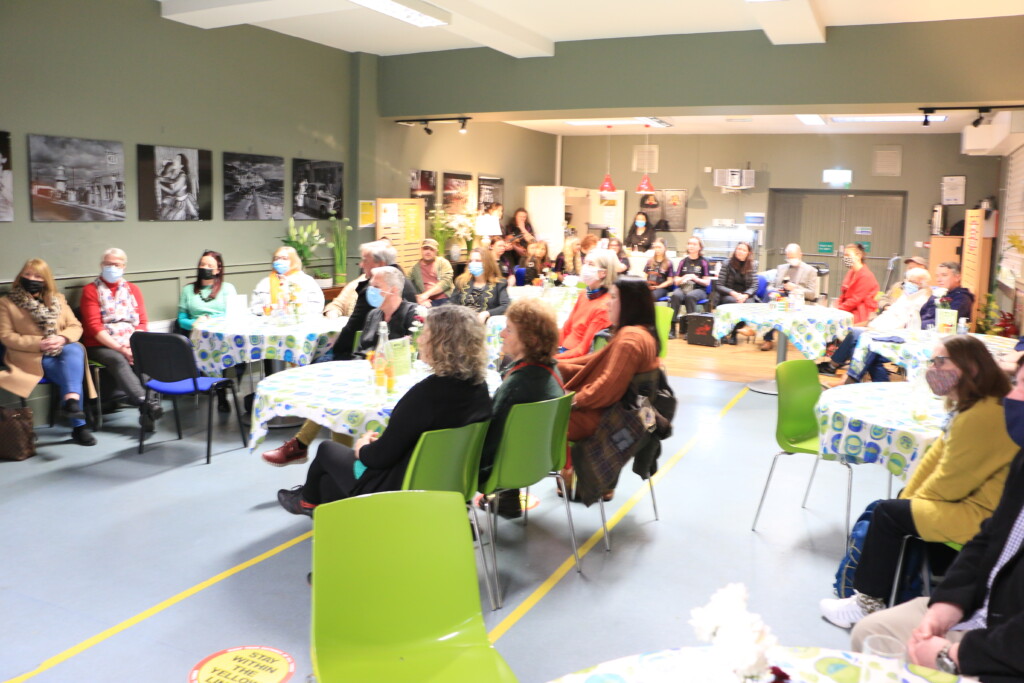 A night to enjoy at CnD Community Café

Following the speeches, the Storyboard was unveiled by Niamh Herbert & Maria Power of the Blue & Green Network to great applause.  More applause followed the opening of the buffet, prepared by CnD Café staff and, with the generous support of Ballycotton Seafoods, a feast of fish dishes were eagerly sampled. 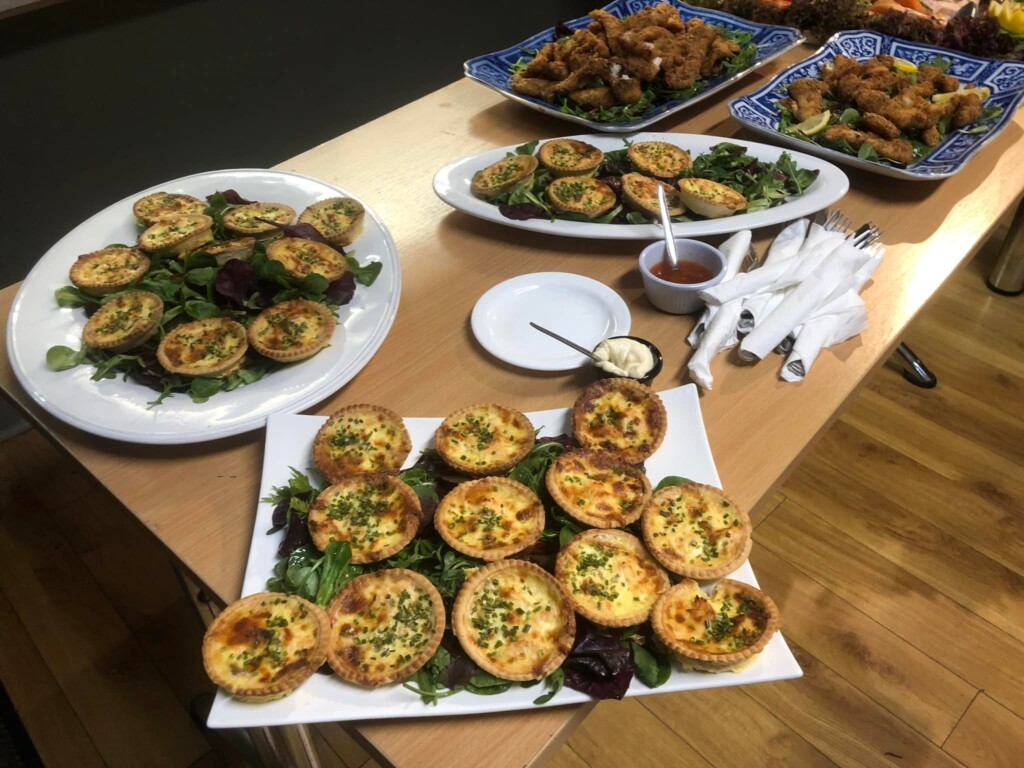 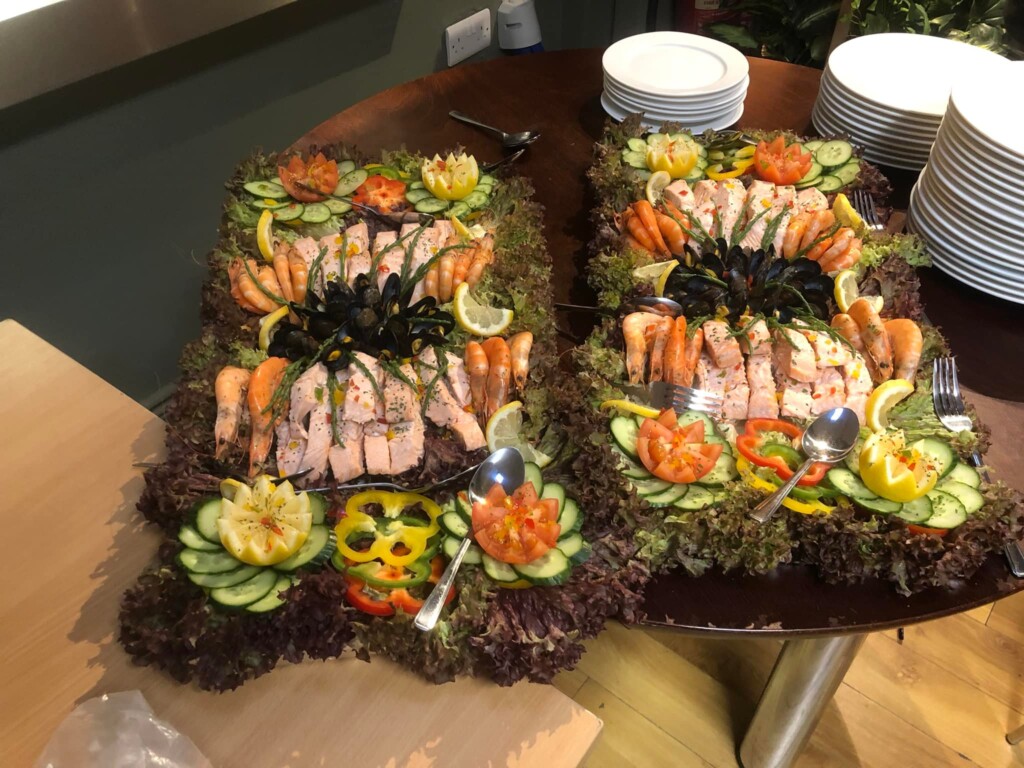 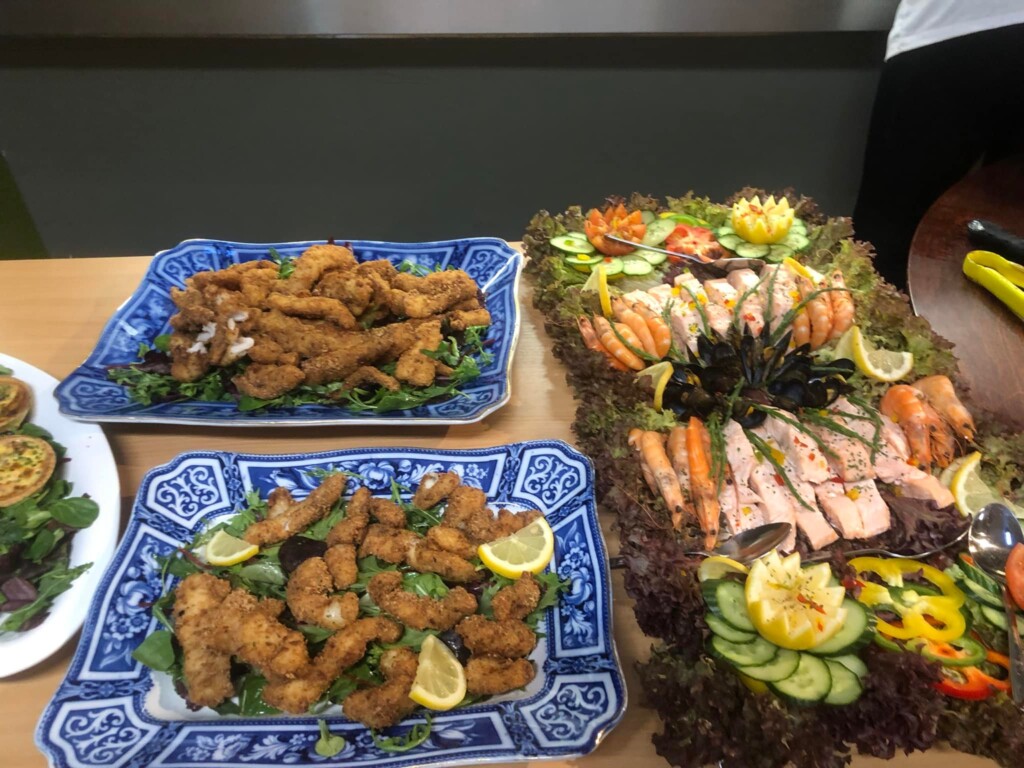 A feast for all! 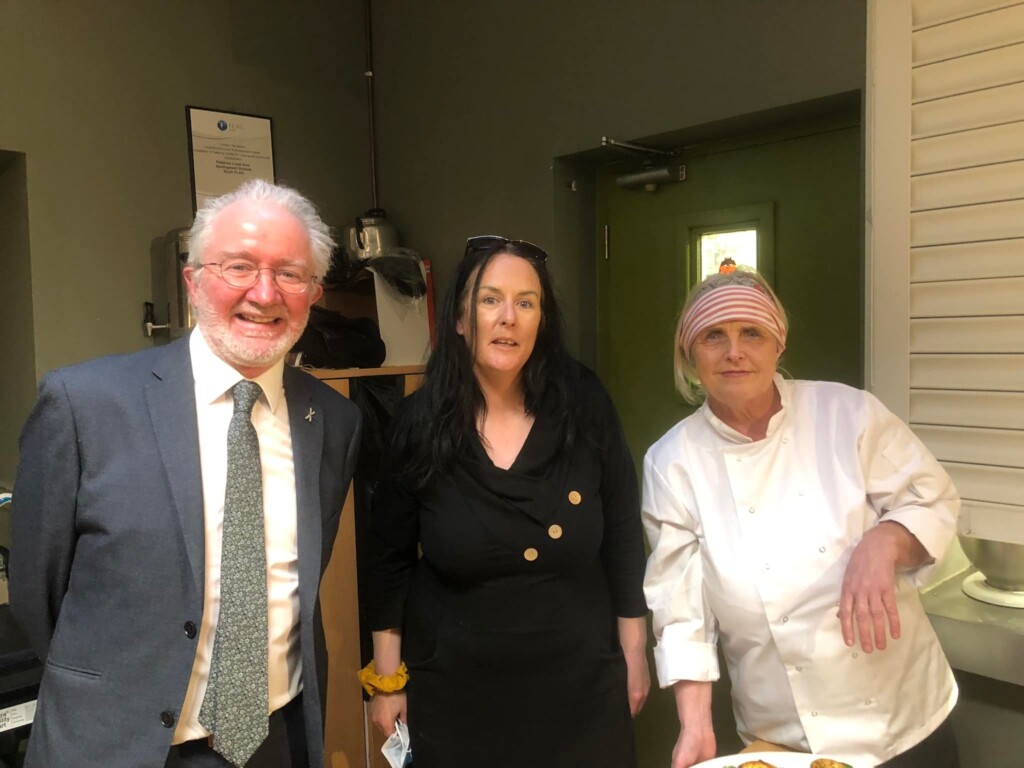 The launch was livestreamed on Cumann na Daoine’s facebook page where it can still be viewed. The Storyboard will, for the present, be housed in the CnD Cafe (open 9am – 3pm Tues – Fri).Over the coming months, the storyboard may tour other community venues, and the Network hopes that in time, it will be placed in a public space so that tourists and locals alike can engage with this important aspect of Youghal’s history.

Cumann na Daoine, Youghal’s community resource whose focus is on development and empowerment for the community, celebrates 25 years of community engagement in 2022. The Blue & Green Network applaud this achievement and hope there will be a year of celebration for all involved.

The Blue & Green Network is a Climate Action group, whose members range from organisational representatives to individual activists. The Network offers training and presentations on issues surrounding climate change, and you can read more about their activities at www.youghalblueandgreennetwork.blogspot.com 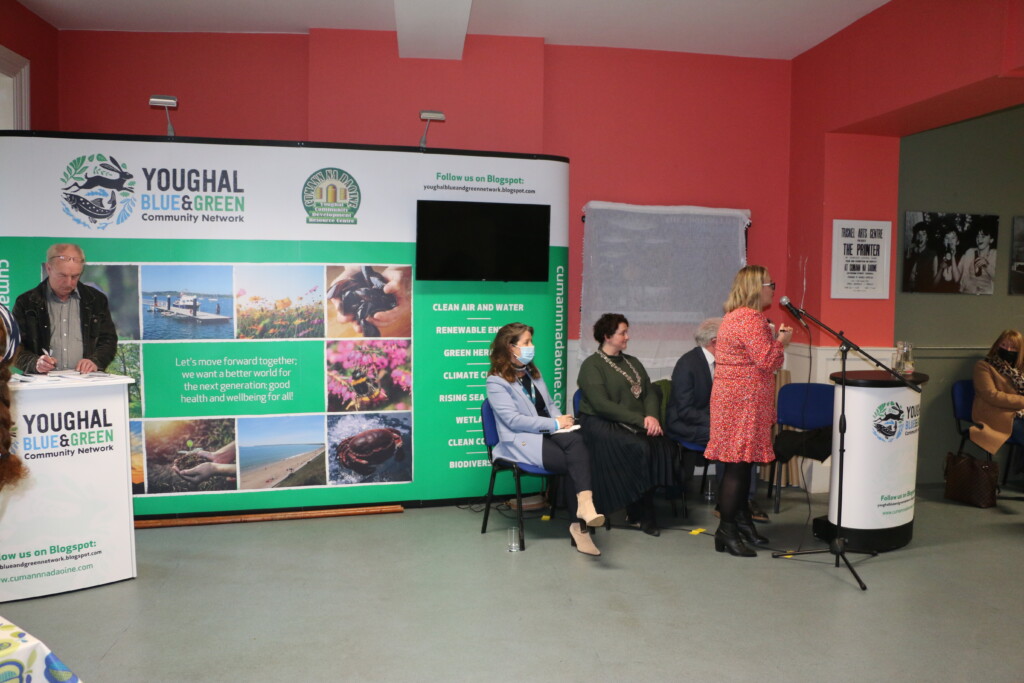 The Storyboard project was funded by

An Bord Iascaigh Mhara and the Local Authority Waters Programme.