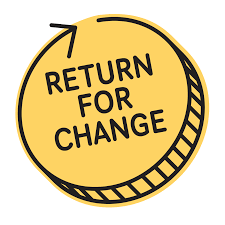 As part of Ireland’s efforts to promote a wider circular economy, a Deposit Return Scheme (DRS) is due to be introduced to Irelandat the end of 2022 to help increase recycling rates of single-use PET (Polyethylene Terephthalate) plastic beverage containers and aluminium beverage containers. The DRS will also help reduce litter, boost the recycling sector by collecting high quality materials, support jobs and assist Ireland in meeting EU targets.

In Ireland each year we use almost a billion PET beverage containers and 800 million aluminium cans, but only 55% of them are recycled.  Half of them end up being incinerated, in landfill or as litter on our land and waterways. This means the loss of valuable materials which can be saved and reused with a DRS system.

The ‘Return for Change’ campaign was set up by the Irish environmental organisation, VOICE, to ensure that Ireland has a world-class, robust Deposit Return Scheme and to let people know what it is.

Minister for Environment, Climate and Communications signed the Separate Collection (Deposit Return Scheme) Regulations 2021 last November. Return for Change is now working to ensure that people nationwide are well informed about DRS and are ready to start using it.

What is a Deposit Return Scheme?

A Deposit Return Scheme is a collection system for used drinks container packaging which incentivises customers to return their empties for recycling or reuse so as to prevent these valuable resources being discarded. The Irish DRS will initially focus on plastic PET bottles and aluminium cans and it will run in parallel with existing kerbside collection systems. These schemes operate in more than 40 other countries and regions around the worldand have been proven to be effective in reducing litter and increasing recycling rates to over 90%.

How will the Deposit Return Scheme work?

A deposit will be placed on every aluminium beverage can and PET plastic beverage bottle (up to 3 litres) used for drinks such as water, juice, soft drinks and alcoholic beverages at point of sale.

This deposit will be refunded to the consumer on each container they return. The idea is to incentivise the customer to return the empty container to any participating retailer to reclaim their deposit.

Under the Irish DRS regulations, producers of these beverage containers will be responsible for establishing, funding and running the system with a scheme operator approved by the Minister.  The scheme is designed to be cost neutral to the customer and retailers will receive a small administrative fee to offset costs attributable to the collection of such containers.

International evidence has shown that over 90% of the drink’s containers sold in countries with DRS are returned by customers.Because they are separated at source, the material gathered by a DRS is higher quality as well as higher volume. This helps build the circular economy and promotes recycling.

What are the benefits a Deposit Return Scheme bring to Ireland?

Litter reduction: Drink containers are one of the most visible types of litter, accounting for over 18% of all litter. Litter has a negative effect on wildlife as well as having a big impact on people’s enjoyment of the environment. Evidence has shown that a DRS can reduce littering of these beverage containers by 85%making public spaces cleaner and more attractive. There would also be economic savings on street sweeping, public bin collection and litter collection costs.

Circular Economy– These beverage containers are made from valuable materials and they are lost when they are discarded as litter or in our black bins. In Ireland we only collect about 55% of PET bottles and aluminium cansbut under the EU Single Use Plastics Directive we have to reach a target of 90% by the close of 2029. Collecting our empty plastic bottles and cans more efficiently will increase the amount of these materials retained and improve the quality of the materials to be recycled so DRS helps with this shift to a circular economy.

Climate Change – Litter, incineration and landfill aren’t just wasteful, they are bad for the planet. Making packaging from recycled materials rather than new can cuts carbon emissions associated with virgin production as well as transport costs.

More jobs – A DRS has also been shown to boost employment, with the potential to create jobs (full or part-time) in administration, transportation, processing and recycling.

Ireland will be part of an international community – The introduction of the DRS in Ireland means that we join over 130 million people in the EU who live in countries with a DRS. The countries with a DRS tend to have the highest rates of recycling for PET and aluminium beverage cans.DRS is also used in most Canadian provinces, 10 US states and a large portion of Australia as well as other countries globally.

Lithuania introduced a DRS in 2016 when its recycling rate was 70%. After the first year they had already reached the 90% EU target for 2025. They noticed a decrease in beverage packaging waste in landfill and as litter, and the quality of the recycling materials was better. The system also generated an extra 1,200 jobs.